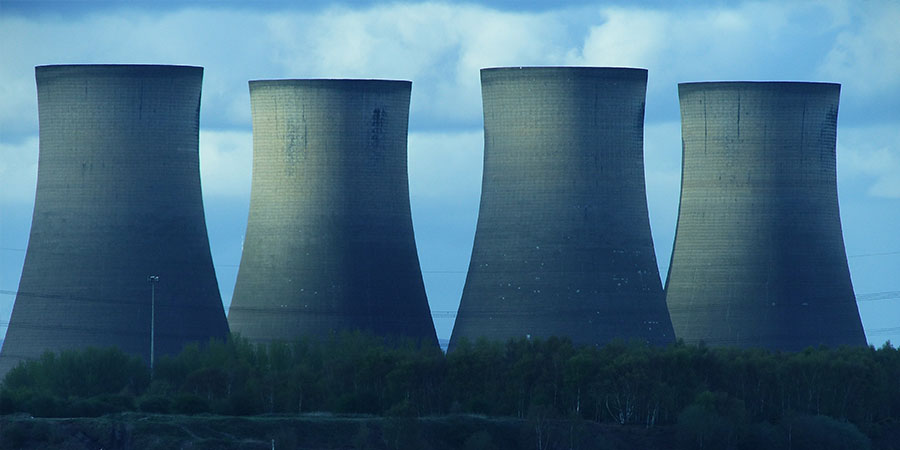 President Biden’s plan: The proposed initial value of the plan was US $2 trillion—the Republicans settled for US $1.2 trillion. 1 This is the largest spending package since Obama’s 2009 economic rescue plan: It introduces US $621 billion for urban and interstate ground transport systems. 2

The plan provides US $579 billion to renovate more than 20 thousand miles of roads 3 and it will invest US $85 billion to fix buses and urban trains. 4 Besides transportation, the plan also allocates resources to other types of infrastructure: US $65 billion to boost internet connectivity for 35% of rural Americans who lack broadband access; US $55 billion for water infrastructure; and finally, US $47 billion to address climate change, of which US $7.5 billion will fund half-a-million electric-vehicles charging stations, switching 20 thousand fossil fuel buses to electric batteries. 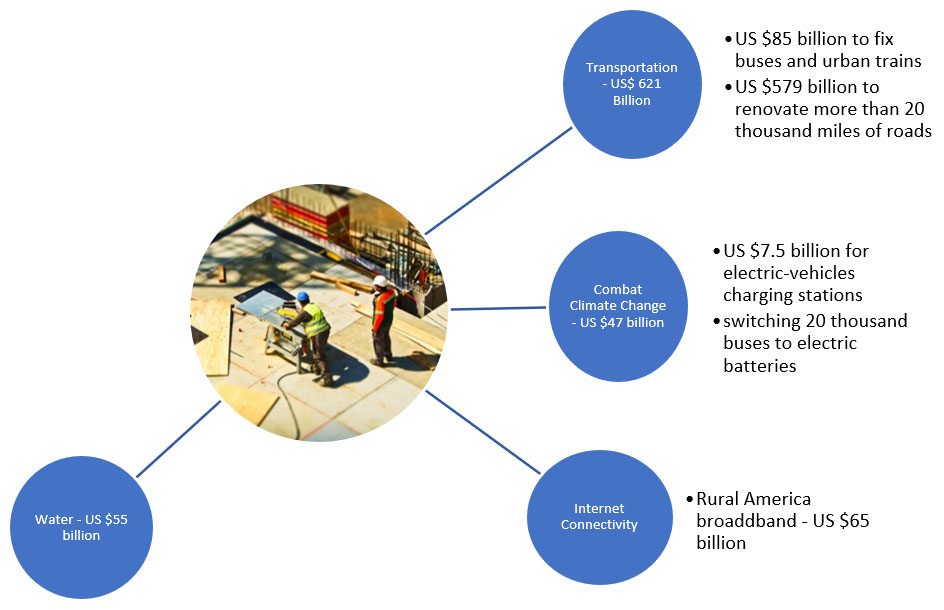 As one can see in the figure above, the plan focuses mostly on urban transportation, with a great focus on rebuilding roads (almost 50% of the entire plan). But there are also sizable investments in public urban transportation, to reduce congestion in the country’s largest cities, which has been a source of waste and loss in productivity for several years. There are funds directed to electric vehicles to reduce climate change, which also impacts urban transport.

Funds were also allocated to rural areas with low internet connectivity. These areas lose jobs and reduce startup business potential, attracting fewer investors in a downward negative economic spiral. Finally, the last infrastructure piece that has been supported on this bill, is the water sector, which needs to improve water quality in low-income regions, regions affected by fracking, and regions with poor distribution. But how are these programs going to be funded?

The program allocated US $40 billion to the IRS budget with the mandate to collect US $140 billion in unpaid federal taxes. Since two dozen Republican governors cut the extended supplemental unemployment insurance program early, Democrats will reallocate these unspent funds (US $80 billion) to pay for the infrastructure plan. There is also US $30 billion in toll credits that states would be allowed to sell in the market. All of this infrastructure investment is estimated to increase total tax revenue an additional US $60 billion. Finally, the tax code would be rewritten to tax the wealthy and multinational corporations that shift jobs overseas. This is the so-called “Made in America Corporate Tax Plan,” which should fund this package in 15 years and reduce the deficit in the following years.

As one can see on this scale, expenditures and revenues do not add up. Even if one adds up the US $310 billion in expected revenues from beefing up the IRS, collecting unspent stimulus money, selling future revenue contracts, and the expected future tax revenue from these investments in infrastructure itself, three fourths of the bill is yet to be funded. That is roughly US $890 billion. This is probably, one way or another, going to impact the total government debt.

Source: US bureau of Public Debt

As the chart above shows, even adjusted for the fast GDP growth rates of the past few years, the U.S. continues to expand its national debt. Total national debt went from 96% of GDP in 2011 to 108% of GDP in 2020. While we live, according to the Treasury, in a real negative interest rate environment, 5 it is likely that at some point interest rates will be going up. As a result, the U.S. might face fiscal constraints in order to service all of this debt. One of the opportunities to finance infrastructure, as explained in a previous note, would be boosting the Muni bonds market. The U.S. has a great Muni bond market that is currently facing excess demand.

Munis are a large liquid market, even in global terms: The U.S. Muni market is a healthy, highly liquid market that allows trading to take place at low spreads. The U.S. economy is experiencing a low interest rate period and as many of these Muni bonds are issued at tax-free rates, it continues to make them competitive against U.S. treasuries.

In global terms, Munis are a large bond market: According to SIFMA, 6 a leading bond trading association, the volume of issuances as of April 2021 was up 14.3% y-o-y, at $145.2 billion. Outstanding volume of Muni bonds, as of the last quarter of 2020, was at staggering $3.9 trillion, which, if it was a sovereign country, would be the seventh largest bond market in the World, as one can see below:

An important bond market: As one can see on the table above, the U.S. Munis market is one of the largest bond markets in the world. It provides security to investors and allows local governments to leverage their expected autonomous revenue sources without weighing in on the national debt. Hence, it could be a great opportunity to fund infrastructure investment without raising the national debt.

Three-fourths of new capital go to infrastructure projects: And while demand for Muni bonds
continues to be strong, as the economy has excess cash looking to invest domestically in tax-
free vehicles, the new capital issuances are divided into several traditional local economy
sectors, as shown below.

Historically, almost half (45%) of Muni funds has been directed to transportation and economic development, with the remaining 18% to housing utilities and the environment, 9% to healthcare and education and 28% for general purpose. These are exactly the sectors already discussed in Biden’s infrastructure plan above. The plan itself has already designed initiatives to boost Munis with the revival of tax-exempt advanced refunding. Munis are a funding alternative that should not be forgotten, as they are in great demand right now and the country’s national debt to GDP ratio is rising fast.

In conclusion, while there is an important national gap in infrastructure that has hindered productivity gains and sustainable GDP growth for the country, the current Biden infrastructure investment plan has a high probability of increasing the ever-rising national debt, even if adjusted to the U.S.’s very large and growing GDP. As a result, the plan might add pressure to the fiscal condition of the country, which might also end up affecting long-term potential GDP growth rates. The Biden plan assures that there will be increases in tax revenue that could reduce its fiscal impact.

We see that the proposed measures are likely to be insufficient to fund the entire plan. So, we believe that the plan will be funded at least partially by large amounts of additional debt. One alternative to reduce the pressure on national debt is to fund at least part of the program at the local level, with Muni bonds. These are in high demand and can take away the burden from the national government. Another alternative is the use of private sector investment (PPPs) to cover part of its cost. Thus, while the plan is welcome, and infrastructure investment is needed, the plan needs to have clear funding strategies to reduce the chances of hampering long term economic and productivity growth. 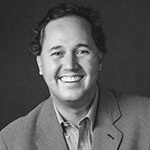 Bernardo Weaver is the CEO of Weaver Advisory, producing Macro Research, Financial Modeling, and transaction advice to global financial institutions. Mr. Weaver has over 17 years of experience advising the World Bank on international deals. He is a financial modeling instructor to top investment banks and hedge funds in Wall Street and London. He also teaches M&amp;A as an adjunct professor at Georgetown University’s McDonough School of Business. Mr. Weaver holds a Wharton MBA degree and has been based in Washington D.C. for the past 20 years, living in Georgetown with his wife and two kids.